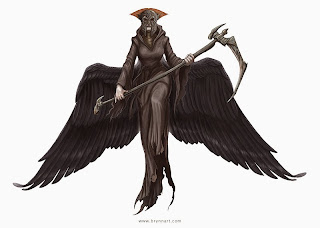 “Soldiers know memitims as the angels of death,” the Inner Sea Bestiary reads—and no wonder, given that the average memitim is sporting both black wings and a scythe, as if wanting to be doubly sure you get the message.  These psychopomps gather in flocks called dirges over battlefields (or more likely, over whatever gray waypoint links said battlefields to the realm of death, be it the Ethereal or some other liminal space), ready to mow down the various soul-stealing predators that are attracted to such scenes of mass devastation.

Like most psychopomps, memitims are by and large uninterested in PCs…unless the PCs’ actions interfere with their duties.  But if your campaign features large battles or sources of planned mass death—abattoirs or engines that run on life or souls, perhaps—PCs may run into one of these masked legionnaires.

Hoping to prevent the death of a gold dragon at Sebastian’s Field—and the subsequent harvesting of its soul for evil purposes—adventures ring Friedar’s Bell of Recall.  The terrible artifact traps the souls of all who hear it on the mortal plane, giving the adventurers time to race to the dragon’s side and either resurrect the beast or give it last rites.  But their route from the chapel to the corpse is blocked by a memitim scandalized at their use of the great bell within hearing of so many hundreds of dying soldiers and dragons.

Adventures are hired by an unusual patron—a bone-winged shinigami—to retrieve an errant soul from a night hag’s possession.  What neither they nor the clerics of the god of justice (who set up the original meeting) know is that the shinigami is a rogue.  The soul can testify to the reaper’s corruption, and when the night hag found out she used it to blackmail the outsider.  if the adventures are successful in recovering the soul, they will be intercepted by a memitim determined to uncover the shinigami’s corruption and send the soul on its way.  Fast-talking adventurers might ally with the memitim; more obstinate ones might find themselves fighting both scythe-wielding spirits at the same time.

Forced to wager their souls in an otherworldly game of chance, adventurers must defeat the schemes of the other players, including a devil, a powerful bogeyman, and an undead sphinx.  The “game board” is a battlefield where the adventures must prevent too many lives from being snuffed out.  All is going well until a dirge of memitims arrive, their terminal auras threatening to bleed out all the wounded on the field.  To win the wager—and save their souls—the adventurers must drive off the deadly psychopomps.

Memitims owe their inspiration to biblical lore; Wes Schneider statted them up for the Inner Sea Bestiary.

No radio show to post since I was away this weekend, but thanks to everyone who submitted to the contest!  I’ll try to have all the entries judged this week (especially since we get to the mist drake on Thursday)—we’ll see how well work and life cooperate.