Compared to the late Middle Ages/early Renaissance characters we tend to emulate at the gaming table, most of us reading this blog are lucky enough to be separated from death on a day-to-day basis.  This is particularly true as it applies to the criminal justice system.  We are (on average) not invited (or forced) to attend executions.  Hangings are not crowd entertainment.  We do not pass gibbets at the crossroads.

That wasn’t always the case.  There was a time when going to the market also meant a decent chance of being confronted with a very public reminder of your own mortality and the mechanisms of power at work.  The gallowdead are that horror writ large.  Not only were these folk killed at the state’s command, they also rise to serve the power that killed them.  Not only did they die hearing the murmuring condemnation of the crowd, they also return robed in an aura of whispers.  (The text says it’s the gallowdead doing the whispering, but I prefer to imagine the whispers just surround it.)  Even death does not end your humiliation at the hand of the state.  Even in death you are made to kneel…and then attack.

Given the gallowdead’s high CR, they are likely incredibly rare, as only the strongest tyrants could execute someone with such malefic authority that the criminal’s very soul is dragged back into service rather than rebellion.  If a gallowdead is recently created, clues to its identity might be easy to find.  Even ancient gallowdead are likely to have been significant personages: upstart senators, war councils whose advice displeased, traitors to the crown, and the like.

The dead who hang from the bridge over the harbor mouth of Wake are no criminals.  They are gallowdead who guard the Port of Undeath from agathions and other would-be saviors—just as they once themselves were.  Any ship without an undead captain, an enchanted pass from the harbormaster, or a thanadaemon escort is attacked.

Some gallowdead outlive the master who made them.  Tessex is no more, but its shape can be easily drawn on a map, for inside its borders a roaming gallowdead known as the Pure Right Hand will not suffer a witch or wizard to live.

When the Great Khan rode to the trade cities known as the Five Swans, only Sunal refused to throw open the gates and kneel in subjugation.  They held out longer than anyone imagined possible—nearly eight months.  When the Great Khan finally broke through the walls, he rounded up Sunal’s leaders and hung them alive on hooks from the Palace of Flowers.  Then he made them watch as he burned Sunal to the ground and took the inhabitants as slaves.  Choked on the smoke of their burning city, the bey and his generals were gallowdead before the even ashes cooled.  Now they guard the Palace of Wilted Flowers and Sunal is known as the Black Swan.  But the Great Khan never found Sunal’s treasury—in his ire he hanged the bey too early—so the gallowdead presumably still stand watch over a fortune.

The other thing we forget about the Middle Ages: they stank.  Animal poo everywhere.  Thank goodness fantasy worlds have otyughs.

The gallowdead first appeared as a template in Dungeons of Golarion as a beefed-up variant skeletal champion serving the Whispering Tyrant.  The Bestiary 4 version is a more all-purpose thrall of tyrants everywhere. 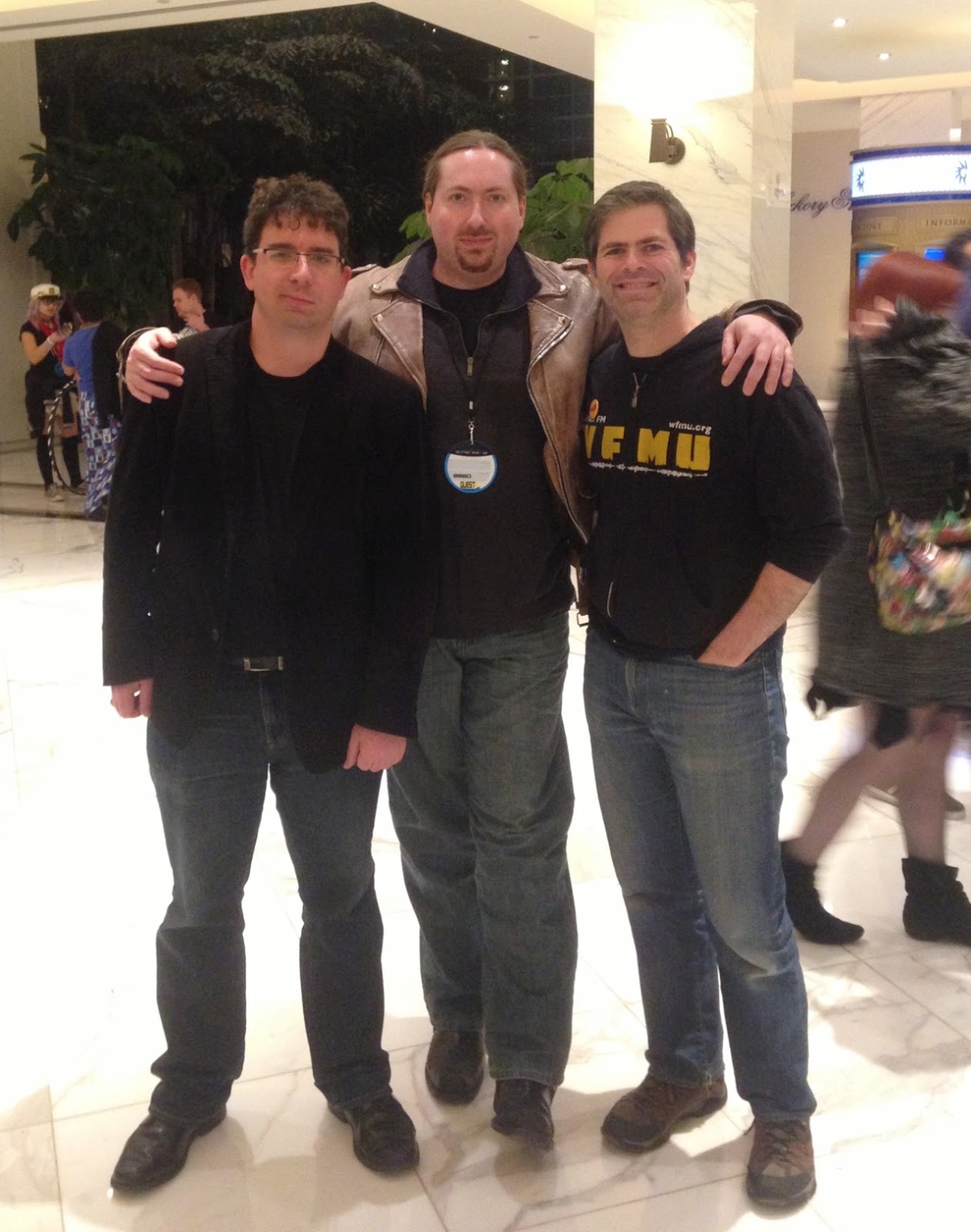 I’m still under the weather—you’ll note my grin is more crooked than ever courtesy of Bell’s palsy—so I wasn’t up for my radio show or MAGFest this weekend.  But I wasn’t going to miss post-con drinks with college friends Rich (now a television producer) and Brian (a physicist and cofounder of The Story Collider).

Some people have mentioned that there was another Brian in attendance at MAGFest, but I’m pretty sure that’s totally a coincidence.

Edit: This photo has only been up a few hours and I’m already delighted at the hashtags it has produced.