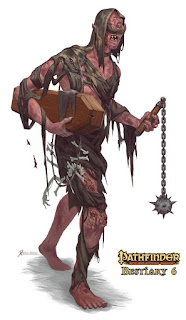 (Illustration by David Melvin comes from the artist’s DeviantArt page and is © Paizo Publishing.)

I’m on record as being very picky when it comes to certain kind of [noun] monsters. I want my [noun] giants to be from some kind of recognizable landscape or elemental force. (I grudgingly accept rune giants because they are dope.) I want my [noun] golems to be from things you carve or mine—no web or stained glass golems, please. I’m basically done with [noun] dragons altogether, preferring more unique branches of the family tree.

Yet all that goes out the window when I hear the word “plague.” Plague golems? Sure. Plague dragons? BAD. ASS. Plague armadillos, plague puddings, plague leprechauns? Why the heck not—let’s make galarchauns a thing! (Somewhere I have an Irish reader who is wincing. Tá brón orm!)

So I like plague giants as they're presented in Bestiary 6.  I mean, who doesn’t love the special ability Hurl Corpse (Su)? (And imagine the cinematics of a giant lair just having stacks of corpses piled around for ammo, or a giant pushing a massive corpse cart the size of a cottage through a blasted landscape.) And they cause a disease that withers limbs. And what kind of monsters do they summon? Vultures maybe? Rats? Nope—tick swarms! I don’t even know why I like that; I JUST DO.

Obviously, plague giants are the result of some curse or divine intervention or some other dire event…and what that event was might be something your PCs can discover in the course of the game, or it might be a mystery they never learn, as they’re too busy dodging rotted corpse missiles.

Adventurers are providing aid to a plague-stricken town when an unnatural mist rolls through town. Out of the fog comes a pair of plague giants pushing a massive cart, offering to collect the town’s dead. The offer is a sincere one, and removing the corpses will help stem the tide of infection. But then the plague giants make their way to the hospital, and begin collecting still-living victims with no regard to their prognosis.

After their service preventing diabolists from disturbing the Storm Moot—and enduring much anti-human prejudice and violence in the process—a band of adventurers are allowed the rare honor of sitting in on giant summit. The meeting is thrown into turmoil when a delegation of plague giants arrives. While not precisely banned from the Moot, the cursed giants have never attempts to attend before.  Most present wish to bar them entry, but they insist, particularly as they come bearing the corpse of the exiled fire giant jarl Vulsk with them.

One reason plagues aren’t more prevalent is that the plague powers are a fractious, jealous bunch—a mix of demigods, daemons, demons, and divs jockeying for worshippers and warring over ownership of specific strains of infection. One sign a plague power is in ascendance is when it has the puissance to transform nearby giant tribes into plague giants, sending them out as earthly avatars to further the power’s ends.