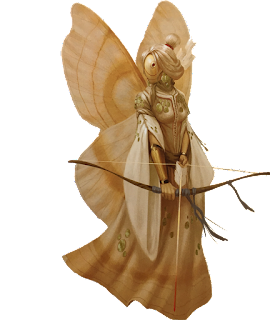 (Illustration by David Alvarez comes from CGR and is © Paizo Publishing.)

Wikipedia claims, “Olethros translates roughly in ancient Greek to ‘destruction,’ but often with a positive connotation, as in the destruction required for and preceding renewal.”  Which makes sense for the Greek personification of havoc (and a daughter of Eris in the bargain)…but it works even better for this Pathfinder monster, a powerful psychopomp associated with souls whose fates hang in the balance.

Olethroses are powerful agents of death, helping to preserve the proper course of fate (at least as they, the psychopomp ushers, and their goddess deem it).  This of course means they may come into conflict with adventurers, as PCs are notorious for wishing to bend fate to their own desires.  On the other hand, olethroses are rivals or enemies of a number of other fate-oriented outsiders and entities, including norns, lipika aeons, and sahkils, which may cause them to ally them with PCs. (Bestiary 6 actually goes into great detail about this, as well as their relations with their psychopomp kin).  Powerful olethroses can even become mothers (a rarity among psychopomps—and most outsiders, for that matter) when old fates fork and new fates reveal themselves, immaculately conceiving new olethroses to study the branching phenomena of destiny.

An olethros has been guiding the fate of a single family for generations, subtly ensuring that every birth, marriage, death, and important event falls in its course.  But when adventurers save the family from a fiery holocaust (courtesy of norn’s quiet influence), they upend a century of planning and earn the enmity of the powerful psychopomp.

The pit fiend Idvidicar the Sculptor has been pierced by no less than six arrows from an olethros's silkbow.  He refuses to remove the shafts, wearing them as badges to signify that no one but he is the author of his fate—or the fates of those under his control.  The olethros who shot Invidicar wants to retrieve the shafts, believing their long exposure to the pit fiend’s foul essence may have granted the arrows unique properties,

An olethros conceived a child, presumably according to some looming twist of fate.  Whatever the event was, though, it has failed to come to pass so far…leaving the gravid olethros in a state of horrible pregnant limbo, in terrible pain that is as much spiritual as it is physical.  As the months have stretched into years, the olethros has become desperate to end her condition…and if that means going rogue and forging a new fate for her child to study, so be it.  Adventurers might find themselves caught in the olethros’s schemes, or even be hired by other psychopomps to bring in the rogue mother.  There is also the question of whether her child will be born an olethros after so long, or if some far darker creature will erupt from her womb instead…