Inspired by tales from Tanzania, the mngwa is a magical beast indeed—a jungle cat that only exists between sunset and sunrise.  Of course, the reason that the mngwa exists actually puts it more in fey or undead territory, as it is “an incarnation of malevolent jungle spirits, driven by anger toward the focus of their hate,” according to Bestiary 5.  Typically taking the shape of a large, jet-black lion, the mngwa is nearly impossible to kill.  Its only real weaknesses are its vulnerability to natural sunlight and the daylight spell.  Hunters might also take advantage of the fact that it always appears in the place where it first manifested.  But since it comes back each night fully healed—and even if slain will return to life within five nights—the only safe bet for dispatching a mngwa is to right the wrong that caused it to manifest in the first place.

Fed up with mngwa attacks near his sapphire mines, the colonial governor of Azbian begins rounding up and executing the witch doctors he suspects of summoning the creatures.  But since it is the witch doctors who are responsible for appeasing Azbian’s omnipresent and fractious jackfruit, baobab tree, and water spirits, the governor is only breeding more of the beasts with each passing week.

A sacred grotto has two guardians—a guardian naga who minds it by day and a mngwa who prowls relentlessly around the rocky spring by night.  The mngwa mourns the wanton felling of a particularly ancient tree that once stood near the grotto.  It longs to slake its thirst with the blood of the traveling woodcutter who did the deed, but the man’s village is too far for the mngwa to reach in a single night.  However, it is more than happy to attack any other humanoids in the area until it can take proper vengeance.  The naga, meanwhile, is interested in a cache of wooden puzzle boxes it found near the spring, possibly carved by a supremely talented but long-deceased dryad.

Lions are the most common shape for mngwas to take, but tigers, jaguars, and leopards are also known.  Some tribes on the far edges of the world report mngwas in the form of bears, great wolves, leucrottas, or even bunyips.  While mngwas are mainly reported in jungle regions, the sun priests of pyramid-dotted Toth are particularly careful not to offend any local nature spirits, as their mngwas are particularly gruesome (Advanced) specimens: part lion, part hippopotamus, part jackal, part cobra, all murder.

I can't remember if I own the Southlands Bestiary or not—I definitely Kickstarted the main Southlands book, but all my Kobold Press stuff is languishing in the “You should really read this sometime” pile.  But I believe (via some Googling) it has another version of the mngwa.

Eagle-eyed readers will note we last visited Toth in 2013. 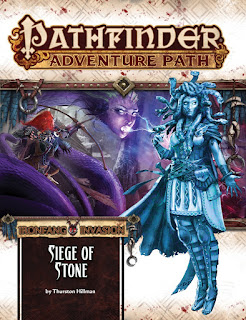 The PDF version of Pathfinder Adventure Path 118: #Siege of Stone—written by Thurston Hillman and featuring an article by yours truly—went live Wednesday night.  If you like PDFs, please pick it up here.  If you like actual books, the print version ships soon, so you can order it right now or just look for it at your local game store.  And once again, thank you all for your support!

(Illustration by Remko Troost comes from the Paizo website and is © Paizo Publishing.)

I was very late to my radio show last week because I was the guest on a comedy podcast—more details on that in a week or two—but I still made it into the studio to play exam-worthy jams for the UMD listening audience.  Stream/download it here until midnight tonight (Monday, 05/22/17, U.S. Eastern) at midnight.  FYI fellow DJ Adam covers for the first chunk; my stuff kicks in at the 37-minute mark.