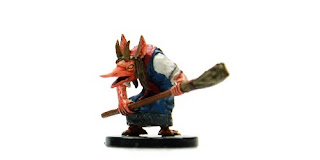 (Photograph comes from the Paizo Blog and is © Paizo Publishing.)

I’m thrilled that the Reign of Winter Adventure Path and Bestiary 5 introduced us to more Eastern European fey.  Particularly because so many of these fey are just the right amount of troublesome.  It’s really easy with fey to go too twee (this was a problem in 1e AD&D) or too grimdark and murdery (I love Paizo’s tooth fairies, but not every GM will).

The bird-beaked kikimoras, then, are a Goldilocksian just right.  A kikimora will torment his or her adopted family for months and even years, making the house appear dirty, sending illusionary (and real) swarms of vermin, or breaking things in order to be offered bribes to fix them.  Worse yet, kikimoras drive away potentially helpful brownies and house spirits, then go about ruining the reputation of these charitable creatures by posing as mean, mercenary versions of them.*

If all this sounds relatively harmless, remember again that this is for years.  (A redcap’s attentions may be fatal, but at least they’re over in a night or two.)  And when the fey aren't masquerading as brownies, they’re playacting as ghosts…and the prices most exorcists charge will likely beggar a poor family. Even once the fey is identified, its extradimensonal hidey-hole makes it exceedingly difficult to flush out.  And even if the poor farmwife could corner the kikimora, a fight with a CR 5 nasty house spirit is likely to be fatal to the average peasant.  But that’s the good news: Fighting a kikimora is a perfect job for journeyman adventurers.

The other reason I like the kikimora is that it’s a relatively powerful domestic terror.  That makes it perfect for nonstandard, magic-light, or slow-progression Pathfinder campaigns such as the Hogwarts-inspired school of magic or modern private school adventure seeds I sometimes post.  And while I’m not the biggest E6 fan around (E6, for the uninitiated, is a take on D&D/Pathfinder that caps out around Level 6, before wizards and clerics get too reality-bending), a kikimora is a truly mystical creature and a proper threat in such a low-powered campaign.  Heck, in most campaigns Baba Yaga is a Mythic (Pathfinder) or Epic (3.0/3.5) encounter…but I can easily see a low-magic campaign where she’s simply an Advanced kikimora with some scores to settle…

A kikimora tormented a local brickmaker for years.  Then one day he spotted the sigil she used to mark her hidey-hole scrawled into the baseboard.  Thinking quickly, he left out a growler full of barley wine.  When the growler disappeared, the bricklayer quickly bricked up the wall in front of the baseboard, gambling he could have her sealed in before the drunk fey would notice.  Years later, adventurers investigate the bricklayer as part of a murder case/exorcism (the victim was bricked up in an alcove and left to perish, and his starving spirit still thirsts for blood).  If during their search the adventurers dismantle the suspicious-looking, out-of-place wall in the man’s home, they release a kikimora driven to near-berserk fury from her long years of confinement and boredom.

On the lam, a gang of redcaps demand aid and shelter from a kikimora, citing ancient fey compacts and invoking the Queen of Air and Darkness.  The kikimora reluctantly agrees to hide the redcaps on her humans’ farm, but this becomes more and more difficult as their bloodthirsty natures take hold and local villagers begin to go missing.  If adventurers find her in the redcaps’ company, the kikimora is honor-bound to fight to the death (or at least until she can plausibly slip away via invisibility).  But if they encounter her separately, the bird-beaked fey (who knows she has a pretty sweet setup already) may agree to ally with the adventurers…for the right price.

Having achieved notoriety in the newspapers for averting a horrible dirigible crash at the London Aerodrome, adventurers are hired as private security for the maiden voyage of the new Geistzeppelin.  An already-difficult voyage involving a prickly captain, some would-be saboteurs, and a Sicilian magician’s pet girallon becomes even moreso when it turns out that a kikimora stowaway is loose on the magical zeppelin, courtesy of a hidey-hole glyph scratched on the Russian ambassador’s steamer trunk.

*Weird.  For some reason I’m having a really hard time avoiding comparisons between these Russian fey and certain misinformation campaigns, fake news websites, and Russian-supported U.S. presidential candidates…  Something about replacing noble and beneficial institutions with kleptocratic mockeries of the same…  Crazy, right?

My readers: You’re going to use any mention of fey as an excuse to link to that one issue of Dragon Magazine you always link to, right?

By the way, sorry for last week’s utterly pathetic posting schedule.  A slow recovery from being sick and some bad time management decisions undercut me all week.  If it’s any consolation, I also had to skip two radio shows, so everything I love has taken a hit.