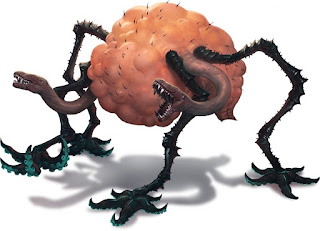 (Illustration by Damien Mammoliti comes from the Paizo Blog and is © Paizo Publishing.)

This is some First Edition $#!† right here.

The dwiergeth is old-school nuts.  And that's totally a good thing.  We need monsters that are just balls-to-the wall crazy as much as we need more non-European monsters and androids and magical animals that still make ecological sense and compelling humanoids with rich cultures.  It’s about balance.  This is the kind of monster you only find in a dungeon crawl or an expedition to the Abyss, and that is just fine.  I never would have combined an infinite gullet and wind powers, but it makes a wonderfully weird kind of sense.  Every Bestiary monster should not look like this, but I’m glad a few do.

(By the way, despite being an extradimensional being, the dwiergeth is an aberration.  I believe the logic there is that outsiders are made of the stuff of/intrinsically tied to the plane they hail from—their nature is bound up in their home plane.  Whereas other extraplanar creatures just live there.  The dwiergeth is from the Abyss and its forever gullet wouldn't be possible were it not for the Abyss’s vile energies, but it is not of the Abyss in the same way as a demon is.)

A vrock has a magic ceremonial rattle it uses in its ruinous dances.  Adventurers seek the rattle for their own ritual purposes.  The hunt leads them to an otherworldly cliffside where the vrock and his fellows fell prey to the native dwiergeths.

Having exhausted the mathematical possibilities of studying elf knots (Möbius strips) and vizier bottles (Klein bottles), a sage wants to study a thornier conundrum: the forever gullet of a dwiergeth.  He seeks adventurers to capture such a beast and help him survive an expedition into its toothy entrails.

A clan of people-under-the-mound (treat as elves with the fey creature template) has turned to darkness.  Their once stately subterranean palace is now riddled with strange cracks and chasms, as if it had burst open and given birth to a mountain range.  Now going from one room to another sometimes means a day of scaling cliffs and building crude bridges.  Dwiergeths hunt these cliffs, making such travel dangerous…and the corrupt fey elves are too lost to decadence and violence to be any aid.

“Dwiergeth” is a very Welsh-sounding name, so I needed an encounter with some Mabinogion-style elves.

Also, for 1e/2e fans, dwiergeths would be great allies of Miska the Wolf-Spider against the Wind Dukes of Aaqa.

In terms of other monsters with extradimensional stomachs, check out Dragon #271, which rethought the bag of devouring as the mouth of a planar sarlacc, or one of those worm-things from Tremors.  Unfortunately I don't have a convenient PDF to link to, but here’s the RPGnet entry for that issue.