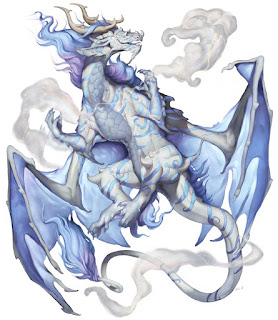 (Illustration by Christina Yen comes from the Paizo Blog and is © Paizo Publishing.)

It’s our first esoteric dragon!  Don't let the label scare you.  The dream dragon is definitely one of those “Even if you don’t use any other [insert monster category here], use this one” monsters.  Maybe your campaign is not much concerned with Occult Adventures’ migration of monadic souls across the Transitive Planes, so astral dragons and occult dragons aren’t your thing.  Even so, there’s still probably room for a dream dragon in your game…because hey, dream sequence!

How you play dream dragons is up to you.  They might be the ultimate expression of the Dimension of Dream’s whimsy and chaos, acting similar to Alice in Wonderland characters.  Or dream dragons might be the calculating masters of the dimension, with the natural psychic might to dominate the countless dreamscapes that manifest every night.  Or they might be indifferent hunters, as happy to devour adventurers as they are to snap up animate dreams and night hags.

Or they might be all three at once.  After all, dreams refashion themselves into new shapes with new moods every night.  Why couldn’t dream dragons do the same?

Adventurers are exploring the hazy Ethereal Plane, determined to track a raiding part of phase spiders.  When they reach the spiders’ lair, they find a dream dragon snacking on the magical beasts.  The dream dragon intends to take the spiders’ surviving captives back to the Dimension of Dreams, and she reacts violently to any attempt to rescue “her” thralls.

The senior faculty of the College at Redstone whisper that the lecturer on ley lines is actually a gold dragon living incognito among them.  In actuality, the lecturer is a dream dragon posing as a gold posing as a half-elf.  He has been using his vast talents to pick apart students’ dreams as if he is searching for something important.  Lately, though, his searches have gotten less discreet—and far less gentle—as if he fears some looming deadline.

Travelers to the Dimension of Dreams speak of a giant paddlewheel craft captained by a positively radiant dragon.  The craft was a dream vessel created by a great wyrm dream dragon (via dream voyage) and then enchanted again and again to become permanent.  Though the great wyrm has passed on, the vessel remains.  Adventurers intend to use the vessel to sail into the dreams of a sleeping crocodile god, but they must defeat the great wyrm’s heirs first. 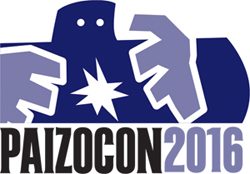 I’ve been too swamped lately to make a big deal of this, but unless something goes catastrophically wrong I’m planning to be at PaizoCon this coming weekend!

I’ve never actually attended an RPG convention before—I’ve only done anime and small-press comic conventions—so this will be a totally new experience for me.

If you’re going to be there as well, you should totally reach out and say hi!  (I will be the guy with glasses and a beard wearing a lot of black.  How many of those could there be in fandom, right?)