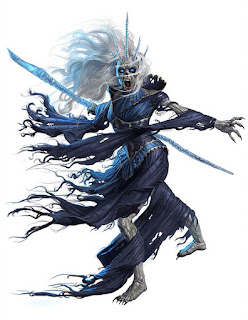 In the Reign of Winter Adventure Path, crone queens bear the weight of legend, story, and a key mystery of the Golarion setting that was preserved in our world for at least five years.

In Bestiary 5, they get all of one sentence of description.

From a page layout sense, this makes sense—crone queens are so powerful that their entries are essentially all stat block.  But for our purposes it means we can disregard that single sentence entirely (especially since it happens to be a RoW spoiler anyway) and come up with our own origins for these frozen monarchs.

Best of all, the crone queen’s tidy list of icy hexes and spell-like abilities make her incredibly easy to run compared to a lich at the same CR.  Oh, and if you do use these queens—particularly if you use more than one—don’t forget to give them each her own personality and special power.  The original entry in Pathfinder #72: The Witch Queen's Revenge should get you started.

A crime occurred.  It battered the elves’ ties to the powers of nature and earned the entire gnomish race banishment from Faerie.  It marked the decline of witchcraft and the ascendency of the spellbook.  It even knocked the world off its axis to its present obliquity, burying some empires in glacial sheets while exposing new lands to the glare of the sun.  The evidence of the crime—and perhaps the perpetrators as well—are locked in a citadel of rime-covered stone, guarded ice devils, undead sovereign dragons, and a ruling council of crone queens who may or may not have handed down the forgotten criminal’s sentence so many millennia ago.

A staff-wielding magus belongs to the Order of Hawthorn, an ancient league of practitioners who take the art of staff crafting, casting and combat to whole new levels.  But rumors persist of a shadow order, the Blackstaves, who use their power for dark ends and travel the world unlocking fell mysteries.  Chasing this order takes the magus and his companions to a lotus-shaped palace carved out of snow, where a crone queen bars their way through a portal with her staff of magical ice.

As freshmen, a group of private school students opened a matryoshka doll they found in a cupboard and were struck by a curse laid by Baba Yaga herself.  Their minds leapt into the minds of adventurers in three eras, where they have had to fight for their survival with shield, spell, and primitive musket against a variety of foes (all of whom happened to be Baba Yaga’s rivals), while at the same time keeping their school safe from invasion by fell forces using the skills they’ve learned along the way.  Now the students are seniors in their time and accomplished adventurers in three others.  But a trio of crone queens still stands between them and freedom.  Their final exams have begun.

Any fans of Arcana Unearthed (the Monte Cook book, not to be confused with any of the Unearthed Arcana titles) out there?  It’s not a book I own, but I’ve peeked through it enough to guess that the magister class would go well with that second adventure seed.