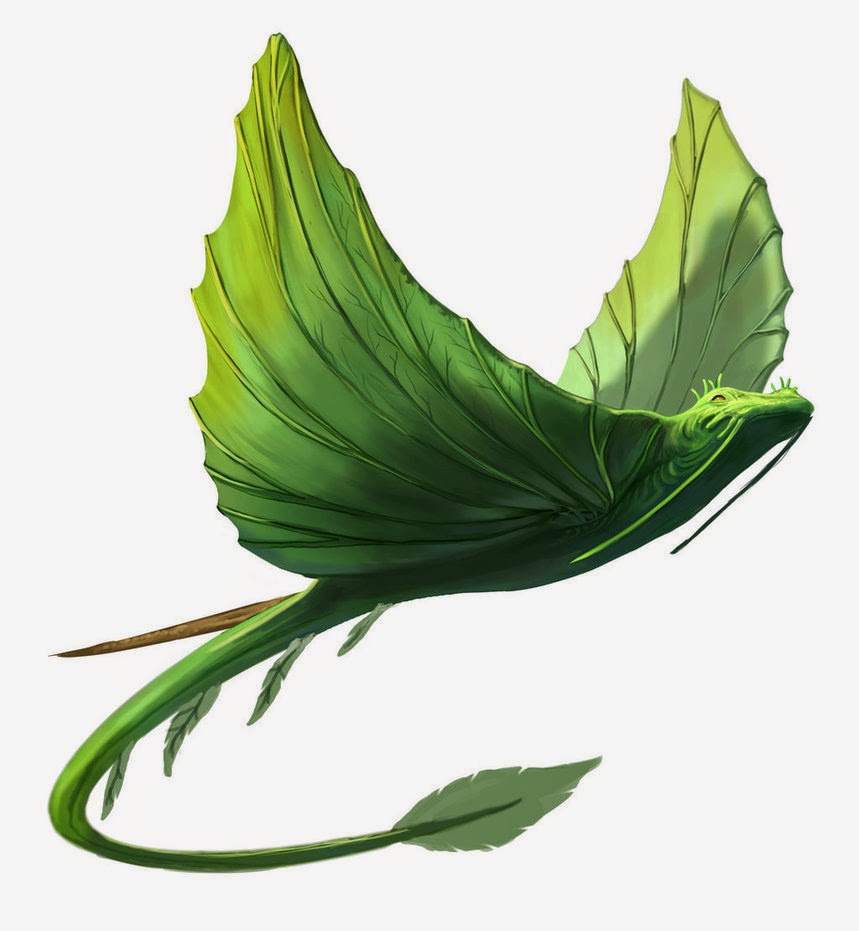 I’m breaking form and actually including a picture (gasp!) for the leaf ray because a) this seems to legitimately be from artist Dave Melvin’s DeviantArt page, so I can give credit where credit is due, and b) because this illustration just perfectly sells this monster.

Utterly plausible, yet utterly fantastic at the same time.  Best of all, it’s a CR 1 monster.  PCs can fight these on their very first adventure!  If you want to show your players that your fantasy world is not a reheated Middle-earth, leaf rays are a perfect way to go.  (I explore this thought more fully in the “Sagari” entry).  It’s also a perfect way to make tropical islands, haunted greenhouses, or far-off jungle planets all a bit scarier.

And what’s that?  A newbie player lost her first character to goblins in a dungeon?  Well, when the rest of the wounded party comes out of the dungeon and are swarmed by leaf rays, and her newly rolled-up druid or elven archer saves the day, you’ll make her feel badass for life.

Leaf rays are a common woodland hazard in Maliar.  To combat them, Maliar’s gnomes craft thorny or spiked armor, and its druids are as much wardens of the few safe paths as they are protectors of the woodlands.  Another side effect is that other creatures that change color with nature, such as dryads, are little trusted.  Even Maliar’s elves are likely to skewer a dryad with arrows on a chance encounter, fearing she will speak with plants and send dangerous leaf rays their way.

A bitter brownie takes a dislike to the new mistress of a manor house.  His anger boils over when she hosts a party—including some adventurers—and the guests’ horses and carriages disturb the grounds he tends (even if lately his work has been sloppy).  Sneaking into the great hall, the brownie hides winter leaf rays in among the logs on the andirons.  The plant creatures rise up and attack when the guests are called in for dinner.

The pony-riding shoal halflings of Dove face numerous threats, including grindylows, bugbears, foul weather, and smugglers and rumrunners.  Life becomes even harder when conquistadors from Sevarre begin planting leaf ray trees up and down the coast—ostensibly to support the dunes, but in reality to drive out the locals so the Sevarren can hunt for gold unmolested.

Holy crud, how did I not Google “lampad”?  I mean, I know I was a little distracted that day, but still.  Turns out they are a thing, and madness is in fact associated with them.  (I still stand by my post though, what with their crying and forlorn wails and all.)

Another explanation for lampads: Dryads are connected to their trees, and nixies to their rivers…when those things are harmed or polluted, the dryad or nixie suffers as well. In a tabletop RPG world, where every hole in the ground deeper than ten feet houses some unspeakable monster than wants to eat you and your entire family…a cave spirit kind of has good reason to be moody or insane.

Finally: Welp.  Hopefully this stuff will see the light of day again though.